Look What the Stork Dropped: A Year in the App Store 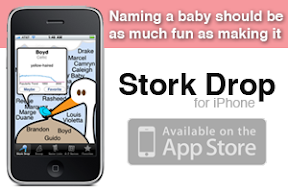 The first year being a developer in the App store has been a fun and educational experience. First off, it was probably only fun because I am not relying on income from my app to support my family. I have a day job that I like and don't plan on leaving to become a full-time developer. It is a hobby, the result of late nights and lunch hours, but I take great pride in my app Stork Drop. Also, I have never had any unrealistic expectations about becoming an overnight millionaire. I do, however, strongly believe that I created a software product of value that could be sold.

The App Store Is The Revolution, Not the iPhone
If I might digress, I believe the App Store is a revolution unto itself. I have studied business and entrepreneurship and never has the barrier of entry to a market been so low where the stakes were so high. Is there any doubt that competition in the App Store is so fierce? Apple has created a platform, environment and level playing field for designers, programmers and marketers to compete against each other solely on the merit and implementation of their ideas.

The App Store may be the first instance of an actual Global Marketplace. Where else could a developer in the Midwest United States wake up and find out that, while he rocking a crying baby to sleep at 3:30 in the morning, he sold his product in 11 countries (two of which he has never heard of and six of which he doesn't even know what their currency is). As far as I'm concerned, the App Store has rewritten all the rules of entrepreneurship.

A Brief History of Stork Drop
The idea for Stork Drop was conceived when I tried to find a baby naming app in the App Store when my wife was pregnant. There were plenty of apps, but they were all boring lists. None of then took advantage of the capabilities of the iPhone...or were any fun. After a brainstorming session with my 3-year old, Stork Drop was conceived. Yes, that's a pregnancy joke.

When I first starting out to work on a baby naming app for the iPhone, my wife was in her second trimester. By the time it was approved in the App Store, Oscar was two months old. During the first six moths, Stork Drop was a Paid app, with the price ranging from $.99 to $2.99 to coincide with random promotions. After fighting a saturated market with many free, albeit inferior, offerings, I moved to two versions: Stork Drop Free with advertising and Stork Drop Premium, ad-free at $2.99. Here is more detailed post about going Free.

Going Ga-Ga for Google
After a month shuffling AdMob, Greystripe and Mobclix, I was ecstatic when I was contacted by Google (yes, someone actually called me) and invited to participate in the AdSense for Mobile Content Beta. My traffic was significantly lower than they required, but I had an offering with a very lucrative demographic that they were anxious to get some ads in front of.

The great thing about Google ads is that they are served from keywords you set. This way the ads are targeted and you don't end up with random ad spam (e.g. Get Ripped Quick, Loose Weight Today, Meet Local Singles) which had been defacing my app with the other networks. Now the ads being served were all relevant to parents and babies...that meant clicks.

Blah, Blah, Blah Get to the Income
Bottom line, I made twice as much the first week from AdSense than I did in two months from the other ad networks. The page eCPM fluctuates dramatically from day to day, but on a weekly basis the income is pretty consistent. There are a couple of nice spikes that seem to coincide with holidays.

Through some rudimentary analytics I implemented with Google App Engine, it was very clear sales of Stork Drop Premium did not correlate to price changes or Stork Drop Free downloads. The conversion rate of Free to Premium was 0.2%. My best guess is that some people probably just can not stand in app advertising or they saw the Premium version in the App Store first.

Regardless of our pricing strategy or offering, we are proud to say that we have been a fixture in the top 10 ranked baby naming app in the store. This translates to between 100-200 downloads of the free version a day. Overall, we have cracked the 100,000 download mark. And just so all you game developers don't feel like your the only ones getting screwed, there is cracked version of the Stork Drop Premium circulating the Internet. Either software piracy can not just be attributed to teenage hackers or those teenage hackers don't know when to pull out. Of course, that assumes that they're getting laid.

Enough Already, How Much Did You Make?
Here is plot of the income generated from Stork Drop Free (red) and Stork Drop Premium (blue) since the implementation of AdSense. The Y-axis has been purposefully removed but it should be apparent that I am not one of the overnight millionaires you have begrudgingly read about. The Google AdSense Beta program explicitly forbids disclosing the financial details, and the last thing I want to do is get on their bad side. Its not the AdSense income I'm worried about losing; its that Google knows so much about me by now and the last thing I want is my kids finding out that I made an "independent" film back in college. 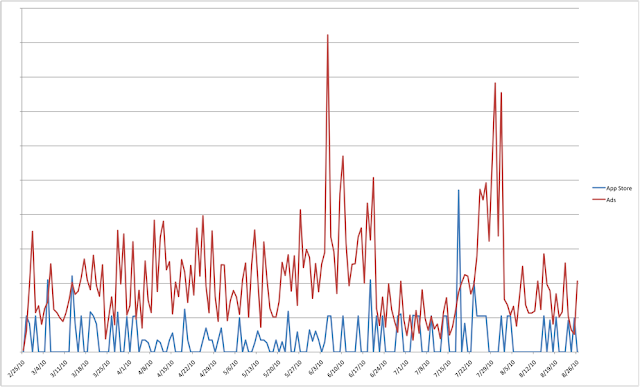 In Midwest, suburban father terms, I made enough income to make half a year of car payments on a Toyota Sienna minivan and take my family on a nice Disney World Vacation without sweating profusely over paying $20.00 for a 8x10" of my daughter and Cinderella (despite the fact I took the same picture with my digital camera).

The Future
I am optimistic about the future of App development, especially for those of us "second shift" developers. For the most part, all it costs me is time, and that's time that I probably would have just been sleeping anyway. As a rule, I have never taken time away that could be spend with my family to work on any app. I have however, extensively involved them in brainstorming and beta testing. BabyBinks has just recently released a new app, Elephonics, that I developed alongside my 4-year old daughter to help develop early reading skills. Her input was invaluable as I remember she said in response to the prototype, "It's not very fun".

As far as Stork Drop is concerned, I have a major upgrade in the works that will transform it from a just a baby naming app to a complete pregnancy tracking app. It's the most requested feature from customers and it will give me a chance to try out the In-App-Purchasing model.

Of course, just like a few other successful apps out there, I have also been busy shopping around a script for "Stork Drop: The Movie". The bad news is that my old director friend from college has picked up the option on it. The good news is that the nudity is very tasteful.