How To: Make a Princess Cake (and Your Daughter Cry) 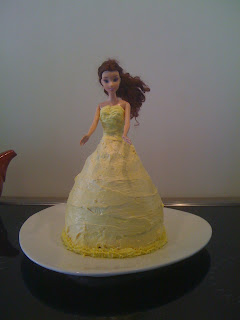 Inspired by reality televisions new offerings of Cake Boss and Ace of Cakes, I decided to undertake this years cake duties for Ava's birthday. Since we are still enamored with the Disney Princess', I decided a Belle cake would be perfect. A little internet surfing revealed a simple trick: make the cake in a Pampered Chef mixing bowl, flip it over and stick in a doll. This seemed way easier than the duck cake I made for a previous birthday. This also helped justify the ridiculously priced mixing bowl that my wife got guilted in to buying at a Pampered Chef party.

I used 2 boxed cake mixes to fill the bowl and had a little left over for a pedestal. A little mixing, a little Big Ten football and into the oven. While the Internet provided an abundance of decorating tips, it was rather light on cooking times. I was afraid that the center wouldn't cook, so I set the oven at 225 degrees (F) and set the timer for 75 minutes. I sat down on the couch to watch the rest of the game and after waking from a nap (whoops), I realized that 2 hours had passed. I ran to the kitchen and was surprised to find a perfect golden brown cake with center fully cooked. 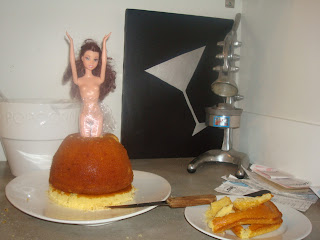 Our particular Belle doll stood a few inches too tall to make the dress look proportional. Opting for a little structural frosting work as opposed to a amputation, I filled in height with some corner pieces sliced from the base. I ended up cutting around the entire base to match the dress to gaining a little height. Belle got a new Saran wrap dress before the plunge.

To finish it off, I went to town with some ready-mix frosting. I ended up using almost two full containers and applied it with a butter knife. The unsteadiness of my hand actually added some interesting details as I frosted the dress. Just pretend like you meant to do it. 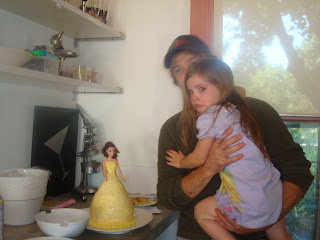 Once I was done with cake (i.e. ran out of frosting), I was pretty please with how it turned out. Margret agreed and I was excited to finally show Ava. I can only describe the look on Ava's face as complete and total horror when she saw the cake. She looked me dead in the eye and said, "You did a very bad thing." She ran crying in her bedroom and slammed the door.

After Ava calmed down and would finally talk to me, she said told me that "you don't cook your friends in the oven". I have to admit, I didn't see that one coming, but it was true. I tried to explain it many different ways, but all I could was to apologize and give her a hug.

We didn't cut the Belle cake that day...in fact she never made it to the party. Together, Ava and I removed her, gave her a bath and put her dress back on. As a family, we all agreed to never discuss it again.