In the App Store: A Day at Free 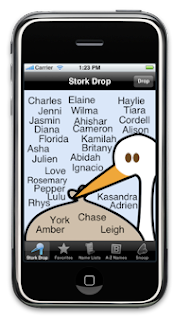 Last month we conducted a one week marketing experiment to measure the effect of dropping the price of Stork Drop, our baby naming application, from $2.99 to $0.99. While the price drop did increase the volume of sales approximately 200%, the price differential resulted in 33% loss in revenue (based on the weekly average). The most detrimental outcome of this experiment was not the revenue loss but a downgrade of our rating. In our case, the experiment seemed to suggest that price was not a major barrier to purchase for a customer who was willing to make a purchase.

A Highly Inaccurate Breakdown of App Purchasing Behavior
An informal survey of the 30 or so people I know who own an iPhone, suggested to me that only about 1/3 of them have purchased apps.  I am aware of the reports that, on average, an iPhone user has spend $80+ in the App Store, but those numbers are averaged out across the whole population and could be misleading.  Of the 20 I know who have not purchased an app, 15 actively search for free apps to meet their needs.  The other 5 (including my mom and dad), had little intereste in using the iPhone as anything other than a phone (blashphemy).  As a developer, this tells me that no matter how good my app, no matter what features I work feverishly to implement, no matter how slick my artwork is, that there is a large population of iPhone users who will never look past the "$" in the App Store.


Free is Not Necessarily Bad...If You're the Consumer
While disheartening, it is easy to understand how many consumers have become accustom to free software.  I, myself, am more likely to download a free app on a whim then a paid app.  Also, in many cases, some of the free apps are just plain better than their paid competitors.  In the small ecosystem of baby naming apps, this is not true...the free apps are significantly under featured than their paid counterparts.  Despite this, free baby naming apps still dominate the top search results when "baby names" is queried.  Either this means that the App Store rankings are nonsensical (which is a definite possibility) or despite their inferiority, free apps are just more attractive to potential customers.

Do I Really Want to Know the Answer?
As someone who is basing his children's college funds on the App Store, there is a very difficult question to answer: Are iPhone users more price sensitive or feature sensitive (i.e. can you really compete with free)?

The only way to test this was another experiment.  This time, I would set the price of Stork Drop from $2.99 to FREE for one day.  If, all the of the pundits are true, and Apple users are willing to pay for quality software, than we should not see too dramatic a rise in purchasers.  After all, maybe I just overestimated the market for baby naming apps.  Maybe the purchasing trends I see on a daily basis are more accurate than the back-of-the-envelope calculations I did.  Conversely, maybe the average iPhone user is much more price sensitive that I expected.  Maybe they are happier with free, albeit buggy and lower quality software.

They're Magically Delicious
I picked a Saturday to conduct my experiment because I had read somewhere that was the biggest purchasing day on the App Store.  At 12:00am on Saturday, I set the price to FREE in iTunes Connect and went to sleep.  I had a couple of crying children to deal with that night, so I didn't really give it much thought.

Half way through my Lucky Charms, I grabbed my iPhone to check my download logs.  I knew that Lucky Charms were magically delicious, but I didn't know that they made you hallucinate.  Oh wait, it wasn't a hallucination, it was just that downloads of Stork Drop were up 400% over the last 7 hours.  Those were the midnight hours too, when there are more single loners with no prospects of having children are up than young, iPhone savy parents-to-be. 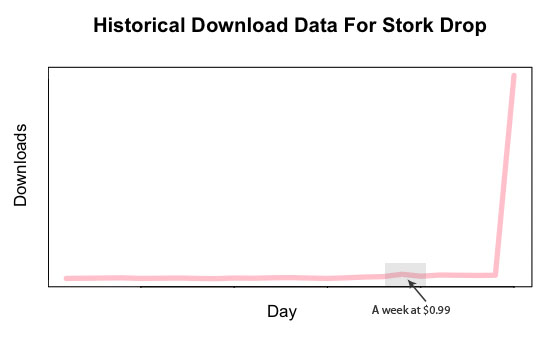 A picture is worth a thousand words (or downloads), so here is the historical download data for Stork Drop.  Downloads were up over 1,100% over the course of a single day. I've highlighted the week at $0.99 experiment to show how inconsequential it was in comparison.  It does not take an MBA to spot the trend.

What Does it All Mean
Is it simply that iPhone users are cheap bastards? Is it just that I priced Stork Drop too high? It it Twitter's fault (the price drop was almost immediately posted to Twitter through some automated mechanism)? Who can blame Twitter for anything but wasting our time and killing our productivity at work? Is it Napster's fault? Maybe.

At the end of the day, I think a lot of it boils down to some of the cultural expectations of software and media delivery over the internet. Maybe people feel the same knee jerk reaction to spending $1.29 for a song in iTunes that I feel. This is most likely due to those early years of consuming so much media for free. It's tough to unlearn behavior.

Despite all the foibles of the App Store, developing for the iPhone is a marketing dream. You have a user base who, by the mere fact they own an iPhone, have disposable income. How much varies by person, but if they didn't they would be on a cheaper phone with a cheaper carrier. It is difficult to argue that these people don't have a couple of bucks to spend on an app. Given the download numbers, I'm going to assume that there is a strong market for baby naming apps, and in particular, Stork Drop. So we have a group of people who found something they like (Stork Drop) and have the funds to purchase it ($2.99), so what is stopping them? That is the $2.99 question.

What Does it All Mean for Stork Drop 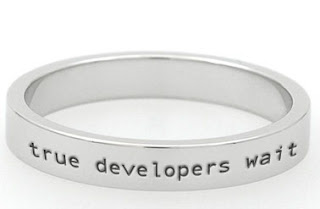 It's like high-school all over again.  You can be the girl who gives it away for free and is wildly popular or you can make them work for it and develop long-term lasting relationships.  When you first sat down and downloaded the SDK did you really want to end up being an iPhone developer slut?

Those download numbers are tempting, but just like the Jonas Brothers, I'm going to wear a purity ring.  The iPhone developer purity ring is a symbol for developers to show that they are happy to make quality software for customers who are willing to purchase it.  This is the only long term business strategy that is viable on this platform, and the only way to make sure you get invited to the Prom at the end of the year.