On Kindergarten and Uncommissioned Frescos 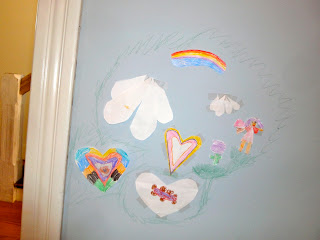 Today was the first day of Kindergarten in our school district.  Despite every effort, we were not able to send Ava to school this morning.  Ava's birthday falls 3 weeks past the cutoff date and our school district is unsympathetic to any variance.

We tried everything, short of Photoshopping her birth certificate, to get her into school.  We tried private, Catholic, new-age, any accredited school program in our area, but they all subscribe to the state recommended cutoff.  One of the school hinted that this was a condition of accepting state funds, so its easy to see why no one was willing to budge.

For awhile, we were devastated that she would have to go back to daycare for another year, when she was clearly ready for school.  She was the youngest in her class, but she was on par with everyone in her class.  Tonight, she read Margret "Green Eggs and Ham" cover-to-cover for her bedtime story.  I would say that should have qualified her for Kindergarten.

But, thats not all she did tonight.  While we were putting Mae and Oscar to bed, Ava showed off her artistic ability by creating a fresco on the den wall.  It was actually quite complex, three hearts representing the children, clouds, a rainbow and even the requisite angel.  These are, in fact, many of the elements of early Renaissance frescos.  The difference, those grace the ceilings of church cathedrals, this is on our den wall.

I was surprised that Margret and I both had the same reaction to it.  We both loved it and could have cared less that someday, we will have to repaint it.  Only time will tell if we are in the midst of an inspired artist, or just a rambunctious, defiant little girl who wanted to draw on the wall.

Maybe she is ready for Kindergaten or maybe she isn't, but either way, we are both glad to have our little girl for one more year.