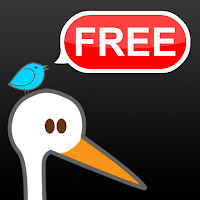 Today, we are announcing that Stork Drop is now a free download for the iPhone and iPod Touch.  We appreciate the thousands of users who downloaded the paid version, but we hope this new ad-supported version will ensure the long term development and support of Stork Drop.

A Brief History of Stork Drop
The idea for Stork Drop was conceived when I tried to find a baby naming app in the App Store when my wife was pregnant.  There were plenty of apps, but they were all boring lists.  None of then took advantage of the capabilities of the iPhone...or were any fun.

After a brainstorming session with my 3-year old, Stork Drop was conceived, designed and developed.  Originally priced at $2.99 with various sales and free days, we were proud to say that we have been a fixture as the 12th ranked baby naming app in the store.

Why Ads?  Why now?
The best part of creating Stork Drop has been all the positive reviews and feedback we've received from our uses.  Ok, the revenue has been nice too, but so far it has all gone into creating and containing shit (via baby formula and diapers).

Since the initial version of Stork Drop, our aspirations have grown.  We want to build upon and expand the community that has embraced BabyBinks and continue to develop great apps for families.  The first important step is to get Stork Drop on as many iPhones as possible.

Putting the multi-core processors on our MacPro to work, we deduced this formula:


(Stork Drop Paid * a few sales per day) =
(Stork Drop Free * .0000001/per ad)
This is based on analytics from a couple of "free" days that we had in which our number of downloads increased over 1000x.  You can run the numbers yourself, but the math works.  The bottom line financially is that we can give away Stork Drop for free and make sure that our shit production and collection expenses are covered.


What to Expect When You're Expecting (Ads)
We put a lot of time and consideration into placing and designing the ad experience in Stork Drop.  First and foremost, we did not want the ads to detract from any of the functionality, usability, or look-and-feel of the app.  After all, if the ads prevent the app from being fun, no one will download it.

We've partnered with 2 advertising providers, Greystripe and Mobclix to try and create a relevant and minimally obtrusive advertising experience for our users. Here are the two types of ads you'll see: the speech bubble banner ad and a full page interstitial ad.


Speech Bubble Banner Ads
Normally, the bird does all the talking in our app, but now our Stork has something to say.  He wants to let you know about products you might want to purchase.  A screen shot of Stork Drop Premium (the ad free version) is also shown.  As you can see, it doesn't really detract from the screen. 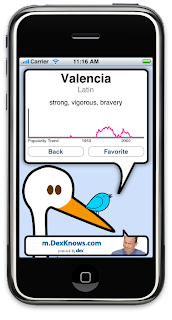 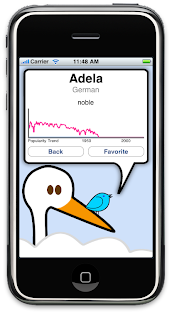 Full-Page Interstitial
The full page interstitial ads are programmed to show every 3 minutes in-between screens.  So if you switch from Favorites to Snoop, and its been 3 minutes, you will be presented with an ad.  These ads are provided by Greystripe, who, so-far, seem to have ads for things you might actually be interested in (as opposed to Free Ringtones and Meet Sexy Singles that are often seen in other apps).  Here is an ad for the Tim Burton's new Alice in Wonderland Movie. 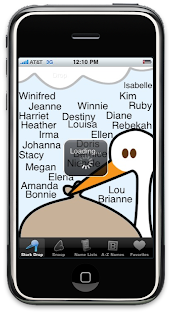 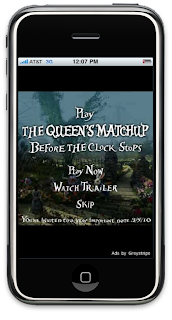 As in any ad, if you click on it, you will be presented with more information and the option to be redirected to a web site or the App Store.

Current Users
If you purchased Stork Drop before this update, you WILL NEVER SEE ANY ADS.  It has been programmed directly into the app.  If for some reason you still see ads, email us and we will instruct you how to disable them.

We hope that making Stork Drop a free download proves to be beneficial for both our users and for BabyBinks. Remember that the App Store is still very young. In fact, it is just entering its "Terrible Two's" stage. And, as any parent will tell you, this is the time when you start to figure out what works and doesn't work.

Unlike my kids, positioning ourselves in the App Store might take more than bribes with M&M's.