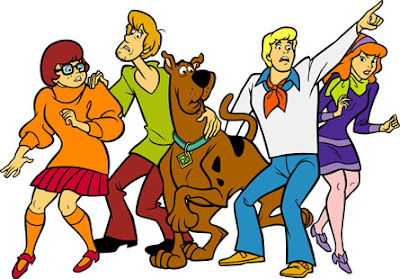 The winds of change have blown across our Tivo again and now Scooby Doo is the entertainment of choice for the kids.  I have a hard time understanding the appeal of the show for a 4 and 2 year old as it seems a little complicated to follow.  On the other hand it has elements of everything that they love: girls in dresses, dogs, snacks and monsters.  I guess there is an underlying genius that Hannah-Barberra had when developing the show to make it appealing to a mass audience.

We have discovered that there are many ways to get a Scooby Doo fix.  There is classic 1970's Scooby Doo with the requisite Harlem Globetrotters crossover, the contemporary "What's New Scooby Doo?", with celebrity voices and band cameos, an increasing full-length DVD movie collection, and even the mid-80's Saturday Morning "A Pup Named Scooby Doo".  In our house, we have our favorites (original Scooby Doo) and least favorite (A Pup Named Scooby Doo).  This is one of the few things that everyone agrees on.

Recently, I've discovered that the Cartoon Network shows Scooby Doo on Sunday mornings.  Having hours and hours of episodes archived on the Tivo has made scheduled viewing a thing of the past, but the last few weekends I have really enjoyed waking up a little earlier on Sunday morning to go downstairs with Ava and catch a "live" episode and eating bowls of sugar-laced cereal on the couch.  During the commercials (another benefit of live viewing),we talk about how daddy would wake up earlier on Saturday mornings to watch cartoons, an era when cartoons were the step-child of televised programming.

On a side note, one thing that I have recently noticed is the correlation between advanced degrees and criminal activity.  As far as I've seen, every fiendish plot of "What's New Scooby Doo?" has been master minded by someone with degrees in robotics, computers, biochemistry or engineering.  I guess in today's modern world, its not the uneducated criminals we need to worry about, its the highly educated.

Let's just see if Scooby and the gang will take the case against toxic financial asset derivatives perpetrated by investment bank MBAs.  They might not have gotten away with it, if it wasn't for that meddling bailout.