In the App Store: 6 Months with Stork Drop

Our baby naming application, Stork Drop, has found a nice little niche in the baby names reference category of the App Store. Unfortunately, "niche" could easily be replaced with "stagnant".

Believe Me I Tried 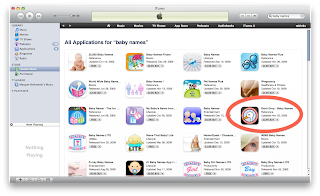 I am not one the developers who is idly waiting for my retirement check from Apple, I have been actively marketing Stork Drop. I continually email app review sites, parenting blogs, parenting networks to request an app review.  I've tried to be active in forums, blogging, twitter'ing, Facebook'ing. Everything short of sexting. I even print business cards with my app logo and a promo code and hand them out to expecting mothers at the Apple store in my town (really).

In the app itself, I implemented two social network options, Facebook and Twitter, allowing people to automatically update their status with their favorite baby names.  Of course, the tag line "...from Stork Drop for the iPhone" was on the bottom of each update.  I thought this would help to generate the valuable word-of-mouth exposure that it seemed to be lacking.

Yes, I have done everything...except spend any money. Stork Drop has not brought in enough profits to justify any real marketing expenditures. I have gone back and forth about reinvesting everything in an ad campaign, but I have a very targeted market that should easy to reach.

It Should Be Easy, Right? 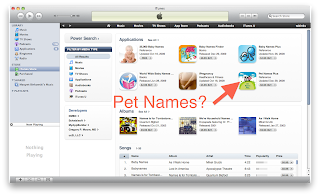 Unlike a lot of apps in the App Store, we have an established market: expecting parents. Many other developers have the burden of convincing a potential customer why they should spend their time popping bubbles, growing flowers, or running from spiders. We have it easy, our customers come to us (so to speak). If you have an iPhone and are expecting a baby, there is a pretty good chance that some day you will type "baby names" into the App Store search bar.

Herein lies the problem...Stork Drop is #12 on the returned app list.  In iTunes, you are presented with 6 apps from the query: 2 free, 4 paid.  The apps range from a poorly rated free app (at position #1) or highly rated $3.99 app.  Of course, there is a pet naming app there which doesn't make any sense, but, if you want to live in the App Store, you need to come to terms with the oddities and insanity that exist.

A Drive to the Top 6
I ran the numbers and figured out if I could get in the Top 6 than I could retire in 2 months.  Of course that's a joke, but who really knows.  My goal is simply to be on the front page when you query "baby names".  My strategy was to release a Lite version that would reach the front page, driving sales of the paid version once people realized how awesome it was.

Originally, I was hesitant to release a Lite version, thinking it would cannibalize sales.  After all, even though most people think they want to be creative and unique when naming their baby, the same names have been in the top 100 list for the past 50 years.  People stick to the most popular ones and those are the ones that would have to be released in the Lite version.

Instead of a Lite version per-se, I tried to "web 2.0" it up and called it Stork Drop Social Edition.  It contained a smaller name database, but you could unlock more names by using the social networking features.  All of these Lite users who used the Twitter and Facebook integration to unlock more names would be running a small ad campaign to all of their followers.

Except I Forgot About One Very Important Thing 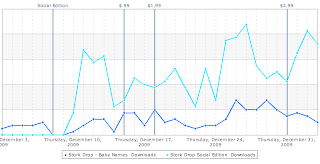 The Lite version launched without much fanfare, just a blog post, but was instantly downloaded about 8:1 over the paid version.  The graph shows the month after the launch date (cyan:Social Edition; navy: Paid).  The Lite version gradually pulled the paid version up, but it was not significant.  What was most disappointing was very few people, literally 11, used the social networking features.  I came to two conclusions: they were content with the name lists provided or they don't want to share their favorite names.

I'm a parent of three so I don't know how I forgot that protecting your favorite baby names is something to be taken very seriously.  In particular, I know a family where two sisters who haven't talked in 5 years after one named her baby Max, even though the other sister had "called" it.  She wasn't even pregnant when she "called" it.

That was clearly a mistake on my part, but either way it proved that the Lite version was adequate for most peoples needs and they weren't interested in the paid version.  This was evident by the 0.9% upgrade conversion rate.  This was not what I had wanted from a Lite version and was not going to get us in the top 6.

When All Else Fails, Brute Force 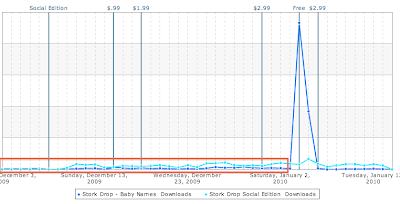 I decided that I needed to get it that top 6 any way I could, to see if that exposure would drive a sales boon. I thought a free day after the New Year would keep the uptick in sales that we saw over Christmas rolling along. So on Jan. 4, I changed the price to free.  The results were pretty incredible, as seen in the plot.  The time period outlined in red corresponds the plot previously shown.

During the free day, at some times we were averaging 2 downloads a minute. On some days, we see only 2 downloads a day.  This blew my mind and our server, which had been comfortably calculating real-time name popularity statistics.  I guess you can view it as a good thing when your Google App Engine account rolls over from a free service to a paid service because of the traffic hit.

It Worked For About 4 Hours 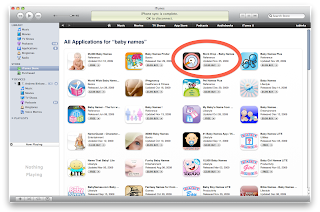 During the free day, we hit as high as #2 but never lower than #4 for a "baby names" query. Thanks to the iTunes connect latency, our price updated faster than the popularity ranking switch from free to paid, so we enjoyed a #3 ranking the following day and a dramatic uptick in sales.

This had confirmed what we had thought, being in the top 6 results in iTunes connect for a targeted audience would be essential to any continued success. Unfortunately, when Apple's server switched us from free to paid, we dropped right back to #12, like nothing had ever happened.  That's not exactly true...our rating, which had been 4-1/2 stars, dropped to 3 stars from all the unsatisfied, free customers that had downloaded it that day.  We saw this before on our last price drop.

What Next?
After 6 months, maybe it is just quite possible that our app is where its supposed to be in the App Store.  Despite our efforts, we can't seem to get penetration in the App Store popularity algorithm that holds back any sales breakthroughs.

We can simply enjoy that our app is near the top of the popularity list for "baby names" and that we have great reviews and feedback from our users. There are several new apps in our pipeline that need more attention at this point, although I can't stop imagining how the name drop will look across a 10" tablet screen. In addition, many of lessons we learned from marketing Stork Drop are probably more valuable than any lost sales during our pricing experiments (A Week at $.99, A Day at Free).

Overall, our sales numbers are pretty consistent day-to-day and that helps pay for the essentials in life: diapers, formula and beer.