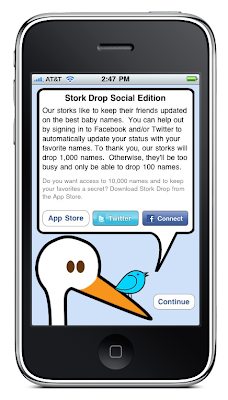 Today, on the sixth day, there is Social, a new class of iPhone apps. On the seventh day, everyone has to shovel, because the Midwest just got a ton of snow dumped on it.

Being Social Has Its Benefits
We are also introducing a new class of apps: social.  Social apps allow you to unlock additional functionality by sharing via your Facebook and/or Twitter accounts.  When you download Stork Drop SE to your iPhone, you will have access to the name, meaning, and origin of the top 100 baby names of all time.  If you choose to sign-in to your Facebook or Twitter accounts, you will unlock 900 more names.  While signed in to either social networking service, your status will be automatically updated with your top 5 favorite baby names.

Of course, if you want access to almost 10,000 baby names you can always purchase the full version of Stork Drop.

It's Not a Marketing Secret; We Want You to Share
The biggest obstacle to success in the App Store is visibility.  Getting featured on the front page of the iTunes Store, either as a Favorite, Noteworthy, or in a Top 10 list increases your visibility.  Having websites or blogs review your app increases visibility.  Of course, getting this kind (or any) of visibility is difficult, especially for small, unknown developers.

So, with over 115,000 apps (and growing), how do you let people know about your product?  We decided to turn to social networking (my local news told me its all the rage).  By rewarding Stork Drop SE users to link their social networking, we enter in a mutually beneficial arrangement: users get more functionality; BabyBinks gets more visibility.