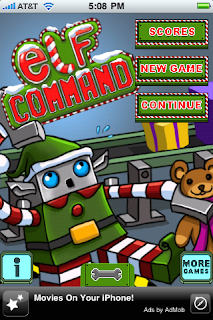 I'm completely resigned to the fact that my iPhone is no longer my iPhone. While I am charged with carrying it, I'm merely holding it for whichever of my kids wants to play on it. At 2 and 4 years old, my daughters have pretty much mastered it (much better than their grandmother). They can both unlock it, find their favorite apps, and launch them. Thanks to cover flow, they can even navigate through my iTunes library to find their favorite songs.

Lately, my 4-year old has become tired of the drawing and memory matching that have held her attention for so long and has taken an interest in games. It's actually quite difficult to find games that work for pre-kindergarten. They have to be simple, easy to play, and fun.

In the spirit of the season, we downloaded a new game Elf Command from Retro Dreamer. They are the creators of the popular Sneezies game. The premise of the game is simple: you help a robot elf sort presents for Santa.

A 4-Year Old's Review
Judging from the time amount of requests to "see" my iPhone, Elf Command is a big hit. She was able to pick up the concept as well as the gameplay very quickly. The only downside was that she felt bad if she didn't score high, because that meant the "some boys and girls might not get their present".

Dad's Review
In general I'm not a big iPhone gamer, nor a big gamer in general. I still have my original Nintendo hooked up in my den, so it shouldn't be a surprise that I enjoyed this game. It's an old-school game (both graphics and sound) that's simple and mildly addictive. Most importantly, it was great to have a game that I could enjoy playing with my daughter.

One thing that was a little frustrating for my daughter was the location of the pause button in the interface. It is easy to accidently hit it, pausing the game and launching a new screen. Even after many plays, she was hitting it quite often, and would end up closing the app and relaunching it. I've found that this is a common problem with many of the kids apps. It's too easy to exit the main screen or exit the app.

Wrap up
Elf Command is free, so it's a no-brainer to download and give it a try. Too bad it will be cleared off my our iPhone is a couple of weeks. Who knows, maybe there will be a Bunny Command for Easter.