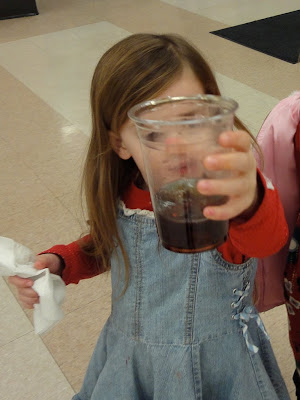 The holiday season wouldn't be complete without all the accompanying parties.  Right now, I can count 7 parties that we will (or should) be attending over the next 3 weeks: Mom work, Dad work, kids daycare, neighborhood gift exchange, and 3 ill-timed birthday's.  When you have so many events stacked back to back, you start to recognize some reoccurring phenomenon that can't be explained simply by holiday cheer.

The series of events that led to this epiphany started at our daycare center holiday party.  We arrived late (as usual) and were seated near the back, but within plain sight of the desert table.  I guess I have to be thankful that my daughter's shoe, which had miraculously gone missing, ended up being found in the pots and pans drawer or I might have never witnessed what transpired.

The desert table was adorned with a delicious mix of cookies, cakes, pies and a modest collection of fruit.  As the night progressed and the children began to run around, I noticed one mother, who was notorious for not allowing her children to eat sugar, freely handing out cookies to any kid who happened to be within am arms reach.  At first, it didn't seem that out of place, that was until her child approached and asked for  a cookie; she handed him a plate of fruit.

Later, a woman, who've I heard filibuster on the evils of cream cheese during a daycare menu committee meeting, was topping off cupfuls of Mountain Dews for a group of 5 year old boys.  After I grabbed a Dew, I stepped back and watched the roomful of parents interacting with other people's children.  From jumping off chairs to running frantically in circles, I saw a dramatic change in behavior that these parents would find unacceptable in their own children being encouraged in others.

I thought it all way quite funny...that is until it was my children.  I looked over and saw my daughter (4) sitting with her friend (4) and her friend's older sister (12).  They all crouching under a table sharing a 2-liter of Coke.  In 15 years, I wouldn't be surprised to see this same thing with a 40oz. of Natty Light.  I'm not totally keen on the kids drinking Coke, but but since it was the holidays, I didn't make a big deal out of it.  Then I saw that neither her friend or her friend's sister were drinking the Coke.  They were drinking juice.  When I asked, they said, "Oh, no we're not allowed to drink Coke".  I asked my daughter where she got the Coke and she told me from their mom.

I am starting to believe there is some deep rooted desire by parents to sabotage other people's children.  I know that may sound harsh, but, after some soul-searching, I find that even I am guilty of it.  I always send my neighbors kids off with a piece of chocolate.  It's almost like setting a time bomb and then waiting to watch the explosion.  And when it does explode, you say "look at how they're acting, must be the parents".  Then in some sad, demented way you feel like you're a better parent...because someone is a worse parent.