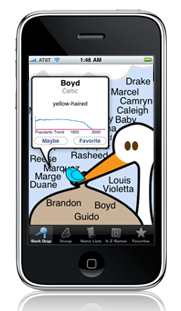 I was originally reluctant to write about this, thinking that I had somehow won some undeserved sympathy from an App Store reviewer who had looked up my download numbers and took pity on me.  That I had somehow been give some of the 'white glove' treatment that some of the prominent developers are accustomed to.  I felt the warm, understanding embrace of the App Store and didn't want to share.  But in the continued climate of negative press about the App Store approval process (and in the Holiday spirit), I thought I would share my recent good experience.

No, Apple was not visited by three ghosts and did not show up on my porch with a fattened goose to celebrate the holidays.  They did not choose to place my app on the prominent front page of the App Store.  They did however approve my last update of Stork Drop despite using non-public APIs.

Precisely, 14 days after the original submission, I was surprised to see the "Your application is Ready for Sale" email in my inbox.  Even more surprising, was the "Application Submission Feedback" email that followed the next day. 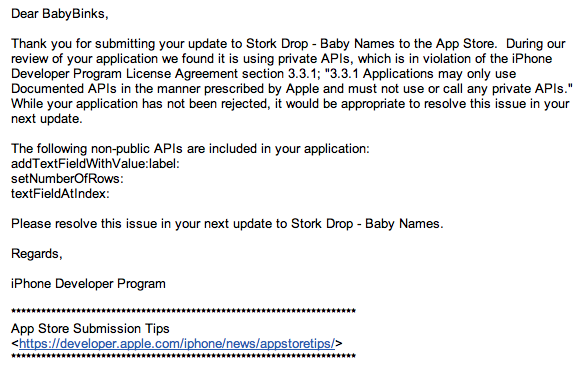 What a great way to handle this, especially with the big shopping season coming up. I guess I was on the "nice" developer list and received an early Christmas present. Now, if I could only get on the front page of the App Store...but that would be "naughty" to ask.