In the App Store: A Week in Education New & Noteworthy 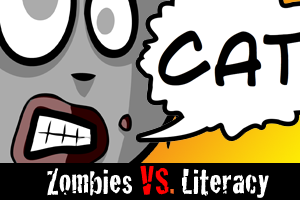 It was a dark and stormy night. The full moon, barely visible behind heavy cloud cover, cast shadows over the sleepy suburban town. Down a darkened street, a single house had a single light on. From the house, eerie screams could be heard, "Daaadddyyyy. Daaaddddy. I want a drink of water."

Awoken from a dead sleep, I fulfilled the hollow request. As I shuffled my way back through the kitchen, I grabbed my iPhone to check the status of my latest app. I was rewarded for my fatherly diligence by an email from Apple: "Zombies Vs. Literacy is Ready For Sale". It's alive...alive!

I returned to sleep, drifting off dreaming about the App Store successes that awaited me.

Zombies Vs. Literacy is a simple app to help practice early reading skills. I designed it for my daughter who is learning "sight words" for Kindergarten. The teacher had prepared notecards with the words printed on them for parents to review with their children at home each night. I scoffed, "Notecards? What is this 1998?" Nobody in the room laughed...especially my wife. 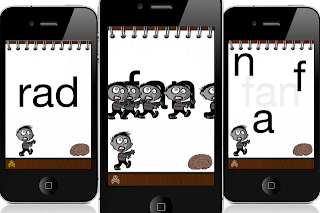 Why would you want to have printed notecards that cost $1.49 for a pack of 100, when you could do the same thing with a $300 iPhone that is extremely fragile, needs to be charged daily, and has enough distractions to practically ensure that your children will end up with Attention Deficit Disorder? Why...ummm...in retrospect, seems like it probably wasn't the best idea.

Either, way I developed Zombies Vs. Literacy. The app functions by swiping to advance through sight words lists (both Dolch and Fry) and tapping to hear each letter spoken. As you advance through the list, the zombie advances towards the brain. When he reaches the brain, he declares "Brain too big!" to eat. My daughter complained that it was boring, so I included a zombie mob that runs across the screen when you shake your iPhone. They rearrange the letters and you have to fix them before you can move on.

I Won't Be Coming in to Work Today, I'm New & Noteworthy

It probably wasn't until noon of the following day, that something different was happening with Zombies Vs. Literacy. I had received 10 support emails that morning about the app. For BabyBinks this was highly unusual, as we have received just over 50 emails in nearly two years in the App Store.

With cautious optimism, I opened iTunes on my MacBook Pro. With one eye, I looked at "New & Noteworthy", but alas nothing. Shouldn't have got excited. Then I switched the education store and (wait for it)...Zombies Vs. Literacy in the #1 slot in "New & Noteworthy". 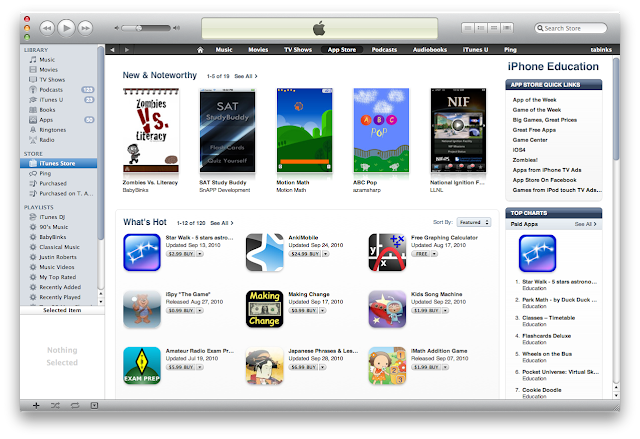 Over dinner, I told my kids how daddy would be able to spend a lot more time with them, now that I quit my job. Ok, that really didn't happen, but that dream was still alive. I was still anxiously awaiting what "New & Noteworthy" meant in terms of sales. Well I have to say, that I wasn't disappointed. Other than a "Free Day" downloads of Stork Drop, this was by far my biggest day in the App Store.

I Will Be Coming in to Work Today, I'm New & Noteworthy But...

While the first day success was intoxicating, reality set in on the next day. There was a five fold reduction in downloads. This trend continues to this very day. The part that surprised me most, was that Zombies Vs. Literacy spent the entire week in "New & Noteworthy". Literally, Monday to Monday it was listed, but only the first day saw big download numbers.

What Did I Learn

Success, Anyway You Look At It

The whole point of creating Zombies Vs. Literacy and Elephonics was to help my daughter practice her sight words. Together, we have used both apps enough to more than justify the development time. Also, she played a very important role in the app development. Watching her interact with it and listening to her brutally honest criticism, helped me to fine tune the usability and features. She also provided the voice overs for the letter pronunciations and, more importantly, the zombie sounds.

So, she is learning to read, I got a small glimpse of success in the App Store, and we got to spend a lot of time together...I would say that anyway you look at it, Zombies Vs. Literacy was a success.

I just hope that we will be as successful working together defending ourself during the next zombie uprising.