There seems to be no end to the unrealistic expectation that the modern media creates for young women. While I initially thought it only applied to popularity, fashion, and dating and would manifest itself harmlessly in eating disorders, premarital sex, and low self-esteem, its reach is much broader and deleterious. 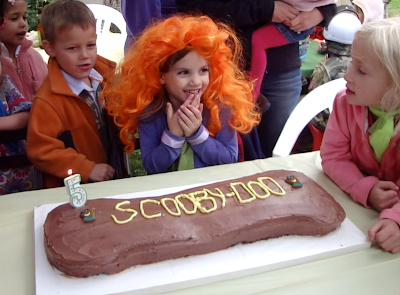 This weekend we celebrated Ava's fifth birthday and I, as I have done for each of her birthday's before, vowed to make her cake...from scratch...with love...and frosting. I have taken a considerable amount of pride in my cakes, from her first birthday duck cake to last year's (poorly received) princess cake. I felt that each cake, despite the questionable taste, was a reflection of my love for my daughter.

Of course, those were simpler times. When an inverted mixing bowl, layered in frosting, was believable as a formal ball gown. Those were times before....the Ace of Cakes.

As a family, we all enjoy the Ace of Cakes, however I did not realize the damage they were doing to my children's perception of what a cake was.  They have completely distorted their expectations on what daddy should be setting in front of them on their birthday.  And that leads to...crying (for me and them).

When Ava's finally announced (in early May) that she wanted a Scooby-Doo party, I have to admit that I immediately thought about the cake. Scooby-Doo provides a lot of options for a cake: the gang, the mystery machine, ghosts, old abandoned amusement parks.  Actually, I would be interested in seeing how the Ace of Cakes would recreate an abandoned amusement park complete with a disgruntled employee.

In the four months I had to plan, I finally decided that an extra large Scooby Snack would be the best.  "The best" of course being the hardest to screw up. It would be impossible to compete with the cakes Ava fawned over on TV, so I decided to keep it simple.

I am happy to report that, despite all of my worries, the Scooby Snack was a hit.  Of course, before I had a chance to enjoy the moment and bask in Ava's excited smile, my dad chimed in "Why did you make a giant dog turd cake?".

"Because last year's princess cake made her cry.", I replied.