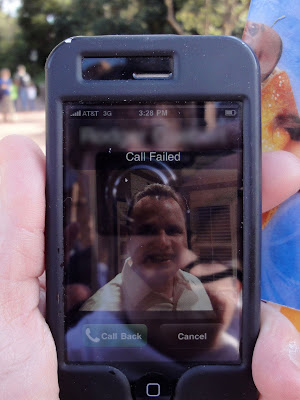 While just last week I was extolling the iPhone for saving our Christmas, problems with AT&T's service ruined our New Year. This year our extended family all decided to celebrate the Holiday season at Disney World. With a 3:1 children to parent ratio, it was guaranteed to be a considerable amount of chaos and unrest, but everyone agreed that it would lifelong memories. Unfortunately, so did 100,000 other people.

With maximum capacity at all the parks, staying together as a group was more frustrating that waiting in line for 180 minutes to ride Dumbo, so we decided to split up. We all agreed to keep in contact to meet early to get good seats for the New Year's fireworks. Seemed like the easy solution until I tried to call Grandpa: Call Failed. Grandma: Call Failed. Aunt V: Fail...and so on. Every attempt to make a phone call from the park was met with an immediate call failed message on the iPhone. I know we weren't alone because in almost every line we waited in you could see people flailing around in frustration while trying to make calls on their iPhones.

Our grand plans to watch the fireworks as family weren't totally ruined. My immediate family serendipitously found the Grandparents, but we were missing several of the others. So heed this warning, if you plan to go to Disney World, remember your iPhone doesn't work. No phone calls, no messaging, no internet and there is no wi-fi available. You essentially have a glorified iPod touch. All services worked back at the Disney Resorts properties, but inside the Magic Kingdom, Epcot and the Animal Kingdom was a wasteland.

Looks like Disney World is ripe for a Verizon commercial.