Dick and Jane and Vampires (and App Discovery Week)

As "App Discovery Week" came to a close last week, it capped off the largest app promo code giveaway of its kind since the iPhone revolutionized mobile computing. When it was all said and done, 3972 applications were given away with a value just shy of $10,000. A special thanks goes out to all the developers who donated promo codes for their apps.

By design, the promotion was meant to encourage app discovery by randomly giving away anonymous apps. A user wouldn't know what app they were getting until it finished downloading. This approach was met with very mixed responses. For those people who received an app they liked, they loved the idea. Those people who received an app they didn't like thought it was terrible idea.

Our use of Push Notifications to begin each giveaway was also met with mixed reviews. The majority of users treated it like a game, waiting anxiously by their iPhones, ready to click. However, more than a few people felt the Push Notifications were intrusive (and annoying) and went so far as to let me know they were removing the Moms with Apps app1.

The Good, the Bad and the Ugly

The feedback we received from everyone, both the good, the bad and the ugly, was very helpful and in the future promo code giveaways will be conducted differently. The most important difference will be that giveaways are now built directly into the app. On Page 2 of the Moms with Apps app, there is a new category called "Promo Codes". When promo codes are available, they will be listed here. Be sure to follow Moms with Apps and BabyBinks on Twitter and Facebook to be the first to know when promo codes are available.

In the future, we will also be more reserved about sending Push Notifications for promotions. In general, we send out a notification every Friday to remind everyone about special App Friday promotions run by the Moms with Apps blog. In addition, we will send out notifications on other special deals or events that we believe will be of interest to the majority of our users. For example, a notification was sent out when entire catalog of "Everyday Mathematics" applications were set to Free to kick off the NCTM conference. 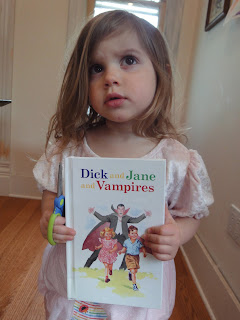 Despite all of our efforts, we acknowledge that the act of "discovery" can not be artificially created. It can be encouraged, as we did through this promotion, but there is no substitute for those serendipitous circumstances that introduce you to something you didn't know existed (but always needed).

These are the kind of events that took place for me this past weekend. While playing hide-and-go-seek at our public library with my 2-year-old, I happened to tuck behind a bookshelf and found myself face-to-face with "Dick and Jane and Vampires". Yes, it's a real book. Yes, it's as great as it sounds. And now our family has a new favorite book.

In that same spirit, I hope that iPhone and iPad owners will take time to click past the first page of iTunes and look past the Top app lists. There are a lot great educational apps just waiting to be discovered. I don't know if you'll find something as great as "Dick and Jane and Vampires and Calculus", but you will definitely find some fantastic apps that will soon be your families' new favorite.

1. For instructions on how to change how your device receives notifications from any app, please see this tutorial.