Why iPads in Schools Won't Matter (to Developers)

Like many iOS developers, I fantasize about quitting my day job to go full-time at building a sustainable software development company. The bloating of the App Store, the notorious 'race-to-bottom' and even the more recent in-app subscription controversy, all seemed like enough obstacles to keep me dismayed at day job while joyously programming iPhone apps at night.

However, the excitement brewing in the educational app market, from the realization that the magical qualities of the iPad might have more to do with children learning, provided a small glimpse of a larger and more predictable app marketplace...educational institutions. If schools embrace the iPad and start purchasing them in large numbers for their students, they are going to need to purchase apps to go on each device.

Cranking the Volume in Education

Apple foresaw this and introduced "Educational Volume Purchase Program" that developers can enable on their apps. At the developers discretion, they can reduce the cost of their apps up to 50% for bulk educational buys. 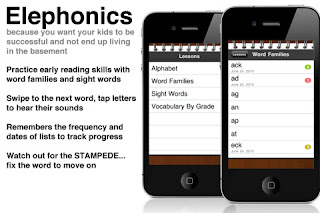 My optimism about the educational market was further sparked when one of my apps, Elephonics, has been benefited from educational volume purchasing. Currently, there is a school district in Ohio and a school in Oregon that use Elephonics as part of their curriculum. Given that my sole motivation for developing the app was to help my daughter learn her sight words, it was great to know that, not only did other kids like the app, but that educators also valued it.

There's More to Rhode Island Than the Setting for Family Guy The headline of an article published in the Rhode Island News on Monday, again provided more concrete validation about the increasing role iPads might play in formal education. Titled, "Electronic tables break down educational barriers in R.I. schools", it described a pilot program at a South Providence middle school where each student was given an iPad. It further described how school districts across the state were being trained on how to use the iPad in the classroom.

I was just about to storm down the hallway to quit my day job, when the article revealed a disheartening detail that made me slink back into my chair.

Buy One, Get the Entire School District for Free

Another magical feature of the iPad is that you can transfer purchases to other devices using the same iTunes account.

I know a few teachers in different school districts who explained to me that a single IT administrator is responsible for all the computing equipment at their schools. It is logical to assume that, if a school makes an investment in iPads, than a single person will be in charge of maintaing them and loading software on them. Using the same iTunes account, a single app purchase could them be installed on all the devices at the school.

This is exactly what the school in Rhode Island is doing.

On the surface, it appears that the App Store Volume Purchasing Program was created to encourage schools to purchase multiple versions of an app because the management and distribution of the software would be simpler. The alternative, as described in the article, requires a lot of man-hours and patience to install the same apps on a lot of devices.

The teachers who were involved in the Volume Purchasing of Elephonics told me that the process was so complex that in the future they would probably just look for Free app alternatives. Just what we need...another reason for users to look for free apps instead of paying for quality software.

As a parent observing how my children have benefited from iOS devices, I am excited to see these devices move into the classroom. As a developer, I hope that educational institutions do not take the approach of the Rhode Island school and load a classroom full of iPads from a single app purchase. If others adopt this mentality then there will be even less motivation for developers to create great apps for educators.

Hopefully, a solution will arrive that makes it as easy for educators to purchase and install quality software as it is for my daughter to practice her sight words.