Proof (of Concept): The Tomato Trellis 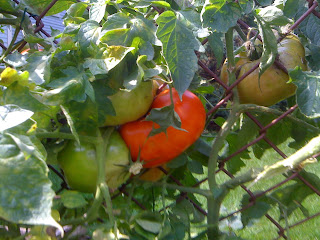 During a late night feeding early this spring, I watched a television show about wine making.  One of the more interesting things I learned was about was "trellising".  Trellising is an old technique whereby the vines are trained to grow in flat, open patterns.  This method has several advantages, the most important being that it allows for a greater yield of grapes and takes up less space.

We had been planning on planting a garden this year and felt limited by the small portion of our yard that received enough sun.  This severely limited what we could grow, but we really wanted tomatoes.  Our garden is built against a fence on one side, and I decided to try the trellising technique on tomato plants using the fence as the trellis.

We planted the sprouts about 6 inches from the fence and waited for it to reach sufficient size to begin trellising.  Once it began to lean under its own weight, I trellised it against the fence using some wire.

The Yield
You can't argue with results.  Comparing to our neighbors, who planted the same type of tomatoes the same day, less than 20 feet from our trellis, we outproduced them.  Also, our tomatoes came in later.  We're still getting them today, while most of our friends have picked their last one.  The best part was that we lost very few...they were easy to pick, easy to see against the fence and didn't have to fight gravity. 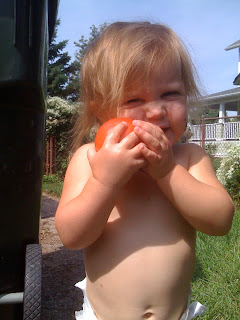 Mistakes
Mistake 1:  We waited too long.  Several of the branches broke during the trellising.  They were too stubborn and resisted being moved.

Mistake 2: I didn't know which branches to trim and which to keep.  They all had flowers on them and I was hesitant to remove a branch that could develop tomatoes.  I errored on the cautious side and removed a small number of branches that seemed hopeless.  This caused by trellsing to be less than beautiful.  It actually looked like quite a mess, but each branch was supported against the fence.  Given the yield of this year's crop, I would safely remove about 50% of the smaller branches.

Mistake 3: Telling the neighbors I still was getting tomatoes.  Now it seems to be a nighly meeting place to congregate and take 1 for the road.