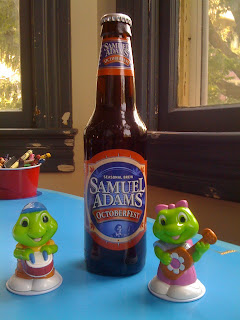 One of the few things I remember from a business statistics class  taken many years ago was the correlation between beer and diaper purchases by men. Correlation analysis of grocery store data confirms that men, between the ages of 25-35, were purchasing beer and diapers more frequently in combination than was expected.

While you might have just shook your head, it actually makes a lot of sense.  It's late at night, you need diapers so you run to the store.  While at the store you see people shopping without chasing down a three-year old running down an aisle with an open box of Lucky Charms while trying frantically to eat all the marshmallows before you catch her.  You need a drink.  A couple of young women untouched by the "joys" of motherhood walk by without so much as a glance, confirming that you no longer have "it", whatever "it" was.  You need a drink.  You catch your reflection in the store security mirror positioned high in the corner allowing you to see the thinning spot on the top of your head. You need a couple of drinks.

So you bring home a box of diapers and a 12-pack of beer.  Either way, both you and the baby get what you need to make you stop crying.

It may only be a matter of time before advertising agencies pick up on this trend and try cross-promotion.  This is Tad and Lilly and they want to help you learn!  This is Sam Adams and he wants to help your dad forget!

Of course, the other scenario is its Fall, and Sam Adams' Octoberfest is out.  In which case, you don't need a reason to drink because it's a damn fine beer!