How To: Build an Igloo 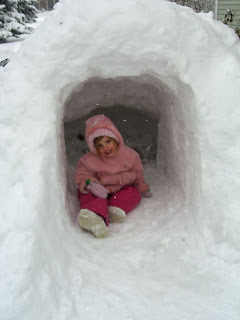 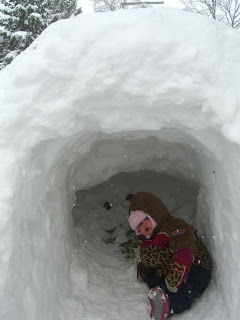 We finally had a snowfall and a weekend happen concurrently. We took this opportunity to build an igloo. I use the term "we" loosely, as Ava and Mae lost interest after about 5 minutes. Luckily, the neighbor and his son stepped up to help out. Between you and me, they were much better at digging.

After several failed attempts whereby the "roof" collapsed, we stumbled upon an incredibly easy solution. We simply laid a garbage can on its side, covered in with snow, packed it down and then removed the can. Removing the can actually requires more twisting than pulling.

The unpredictable Chicago weather inspired us to take a couple of precautionary steps to ensure that our igloo was solid. We put the can back in the opening and doused the entire structure with water. A few hours later the igloo was covered in ice and solid. If I had to make a guess, I would say it will last until April.